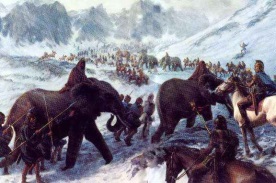 The map is dedicated to the Second Punic War.
The main participants in the war were Rome and Carthage. The struggle was for supremacy in the western Mediterranean. This is one of the largest and most significant wars of the ancient world, after which Rome became a world power.

After Rome conquered Italy, he encountered Carthage, the largest state in the western Mediterranean. The First Punic War had begun and It ended in 241 BC in victory of Rome. Carthage loss Sicily.
Аfter 20 years Carthage begins a new war. The main initiator of the war was Hannibal, the son of the commander of the First Punic War Hamilcar Barkа. The war began with the unexpected passage of Hannibal through the Alps. The first stage was very successful for the Carthaginians. But a decisive victory was not achieved, the Romans were able to resist the final defeat in Italy, then defeat Carthage in Spain, and at the end transfer the fighting to Africa. There the decisive battle took place, in which Hannibal was defeated.

In addition to Rome and Carthage, Macedonia, Numidia, Syracuse, the Achaean Union, the Aetolian Union and Pergamum also participated in the war. The war lasts 17 years.

Map texts are taken from Wikipedia.
The project is open, if you have a desire to understand world history or share your knowledge, you can take part in mapping.
View map